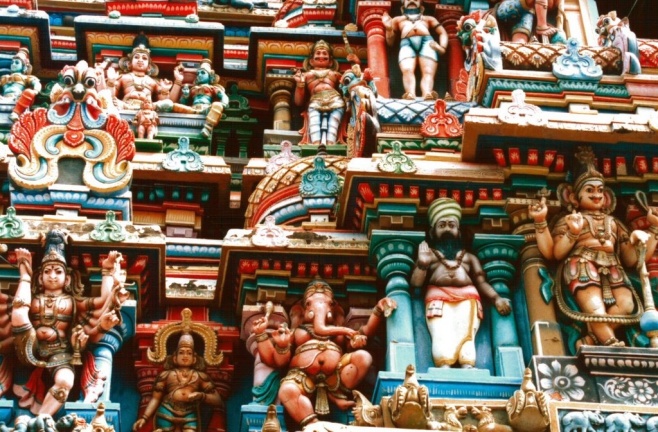 In the southern Indian state of Tamil Nadu is the bustling, crowded city of Madurai. Within it, is one of Asia’s great wonders, the Meenakshi Temple. Dominating the city’s skyline, 12 gopurams (temple towers) burst out towards the skies, engraved with thousands upon thousands of colourful images of Hindu gods and scenes. The temple is devoted to the god, Shiva.

The ground on which the current buildings are located, has been the focus of religious rites since the 7th. Century. Much of the grand architecture that defines the temple today, was constructed by the Nayaks during their tenure as rulers of Madurai from the Sixteenth to the Eighteenth Centuries.

Within the walls of the complex are many small temples, where offerings of oil, incense, colourful powders, candles and flowers are placed.

There are several different sanctums that the worshipper passes through. The inner sanctum is a space for only Hindus to enter. Becoming disorientated by the vast complex, I accidently entered into this space. It was poorly lit and extremely atmospheric.

A large statue of Ganesh, illuminated by candles, caught my eye. As I was preparing to take a photograph, I was soon made aware of my mistake, when a sadhu (holy man) shouted at me to leave. Another man, came to me, and politely told me that I was not permitted to visit this area. I apologised appropriately and left quickly, so as not to further offend. However, I felt rather lucky and blessed to have entered the holy of holies and get more than a peek. I meant no harm nor disrespect.