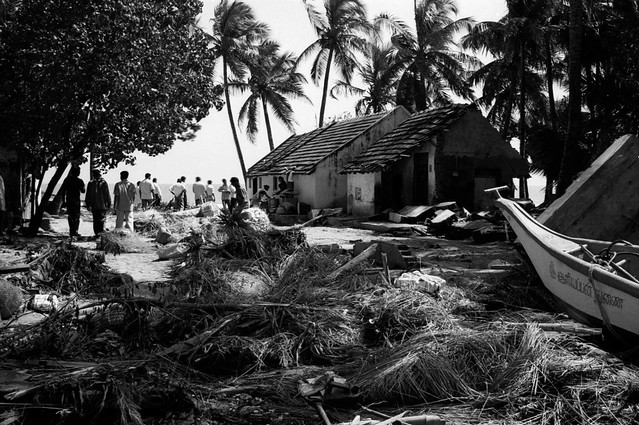 Today is the 10th anniversary of the horrific tsunami, which brought devastation and death on a scale that is still very hard to comprehend. I was in South India at the time, where the coastline of Tamil Nadu was badly hit.

Personally, I was never in any direct danger, because I had luckily been sidetracked to visit Amachi’s ashram, the night before the tsunami. However, due to a collapse of the communication system that followed the disaster, I was unable to contact my friends and family for days, causing them great stress, especially for my grandmother, who was very sick with cancer.

Everyone on the ground wanted to get involved in efforts to bring relief to those desperately in need. I managed to hook up with an Indian group of volunteers in Pondicherry, whose intentions were good, but were very badly organised. It was from this experience that I gained a great deal of knowledge about the dos and don’ts required in disaster relief efforts, and this knowledge was applied to great use during the Tohoku tsunami disaster, in Japan.

In memory of that terrible day, I share with you the blogs I wrote of my experiences of the tsunami aftermath in India.

I would like to firstly thank everyone who showed concern about my whereabouts. Happily, I can report that I am fine.

I arrived in Kanyakumari two hours after the tsunami hit the area. Kanyakumari is the southern most point of India, and was hit particularly badly, due to the channel that Sri Lanka and India make. I had been on the train for most of the day, so I was oblivious to the news, and had no idea that a disaster had hit the region.

Carrying my heavy backpacks, I headed into the small town on foot, in search of the Hotel Maadhi. A gentleman came up to me and immediately wanted to guide me. As is routine, I was suspicious of his motives, assuming that he wanted either money or was trying to take me to another hotel. Anyway, I followed him down into the small village by the sea, through tiny winding streets. As we got closer to the sea, he gestured to me, and I was surprised to see electricity pylons laying over, wooden planks strewn about and blocking the paths, as well as people carrying out belongings from very damaged homes.

He helped me clamber over the debris, supporting me when I lost my balance. I was confused by the wreckage, and it crossed my mind that perhaps a tsunami had hit. Of course, I had no idea when this may have happened.

Finally, I reached my hotel. When I turned on the television, I was surprised to find Indian news channels reporting about the terrible calamity. I quickly found the BBC, and was shocked to learn why the village just below my room had been destroyed.

During the night, whilst the moon shone above, I could see people walking up and down the beach searching for the missing. Periodically, a military helicopter flew past. Perhaps the worst part, was hearing people crying out names repeatedly from the beach throughout the night.

The next morning, the receptionist at the front desk, informed me that around 250 people had died in the village, and that over 700 had died in the region. These were, of course, the early assessments. As all of us our sadly witnessing, the death toll is continuing to rise by the hour.*

I am currently in Madurai, but I will write about that at another time. Thank you, once again, for your kind thoughts. It really is appreciated. My prays go out to all of those who have been affected by this tragedy.

It is disappointing to see how slowly it is taking to get relief to the people suffering as a result of this disaster. That said, the scale of this calamity is like nothing we have seen before, so assembling adequate relief is unfortunately going to take more time. I heard a United Nations representative say that it could be another 72 hours before help arrives at the hardest hit areas of Indonesia. Let’s hope that everything humanly possible is being done.

Today, I bought several huge bags of rice, as well as a very large quantity of purified water. My supplies are being kept at a depot, which is collecting rations and clothing for the hardest hit areas. If everything works out, I should be visiting the areas tomorrow to handout supplies. The local guys here have been fantastic. They even separated out my rice into individual small bags.

PLEASE DIG INTO YOUR POCKETS AND HELP THESE PEOPLE!

Yesterday, as arranged, I met up with a local group of Indian volunteers from Pondicherry, in Tamil Nadu, to help with the distribution of relief.

I was put in contact with them, after talking with an Internet Cafe owner, about my desire to help in someway. I have been enormously impressed by the altruistic spirit of the community here. The volunteers that I joined, comprised of school students, barbers, shop owners and people from many other trades. Whilst our backgrounds were varied, the compassion was clearly the same.

Large sacks of clothing and food supplies were loaded on to trucks. We travelled for about 28 kilometres out of Pondicherry, reaching two villages that were devastated by the tsunami. At our first stop, people were huddled under tarpaulin. I learnt that 30 people had lost their lives in this village; many of whom were fishermen.

As aid was being distributed out, several young men gathered about me. Of course, being the only foreigner made me a target of attention. My friends from Pondicherry, insisted that I return back to the vehicle and wait inside, because it was becoming dangerous. I appreciated their concern.

We drove further into the village, where I was greeted by a school headmaster. He was insistent that I should see the damage that had been inflicted upon the several school buildings.

Inside each classroom, decomposing plant matter and sand lay thick upon the floors. Cabinets, desks, chairs and doors remained exactly where they had been positioned violently by the waves. In one classroom, the trunk of a tree had smashed its way through a door, landing within. The teachers insisted that the wood was not local, but perhaps from the Andaman Islands.

In another classroom, lay many folded school uniforms, still wet from the monster waves. Thankfully, no students were lost, because the disaster occurred on a Sunday, so the school was closed.

As I walked further into the village, more horrendous scenes became apparent. Stone buildings were either partially or totally destroyed. One house had completely been wiped out, killing the entire family that had resided within. Basic huts made from straw and palm leaves, now just laid as indistinguishable heaps. Closer to the shore, many boats had landed upside down, upright or broken against palm trees.

On the beautiful beach, sitting quietly under a tree, was an old white-bearded man. Like so many people I have met throughout this catastophe, he was desperate to share his story. The tsunami had not only washed away his home and business, but it had also killed two members of his family. This quiet, gentle man, somehow retained a composure that I am sure very few would have under similar circumstances.

The second village I visited, shared the same scene of destruction. People poured through the donated clothes that laid on a blue canvas sheet on the ground. In this village, sixteen people had been lost.

Villages such as these, can be found along the entire eastern and southern coastline of India, as well as in the other Asian countries affected. The scale and magnitude of this disaster is incomprehensible. We must all do what we can to alleviate the suffering that has befallen these poor people.

As my trip in India comes to a close, I have reflected a lot upon what I have seen and experienced. Never had I expected to find myself at the site of a major disaster. The scale of what I saw, will forever stay with me.

It was announced that in Jakarta, the world’s nations had pledged an unprecedented amount of money for the relief efforts and rebuilding of the hit areas. The public donations have also been incomparable worldwide.

At a time when human indifference to world crises was starting to appear as a widely accepted trend, it is pleasing to discover that empathy has not yet perished in the light of the tsunami disaster. The real test will be in the long term, as to whether people’s interest can be piqued enough to continue contributing to the effort. All of us have to be in it for the long haul.

Some people have questioned the role of government in charitable work; that the spending of taxpayers’ money for efforts in distant lands, is some kind of irresponsible abuse of funds, while problems remain within the contributing country. This kind of callous rationale I find very disturbing.

As a human characteristic, the expression of compassion should easily outway the frugal self-interests of a few. Compassion must always be encouraged, because it inevitably nurtures positive changes in society.

In a world that recently has been driven by profits alone, often at the cost of human rights, I hope that this outpouring of compassion seeds the start of an age in which people are more responsible for each other, rather than to themselves.

Already, discussions for debt relief have been widely recommended; although this should have been achieved decades ago. If the so-called “Developed World” genuinely wants to improve the lives of those living in the “Developing World”, then leadership through example, rather than force or manipulation, will succeed in bringing about positive transformation to all.

2 Responses to “Ten Year Anniversary Of The Asia Tsunami”