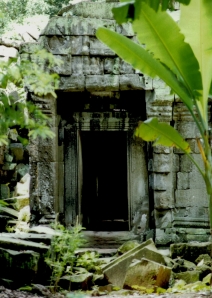 In fantasy literature, a reoccurring theme that is present in a vast number of classic tales, is that of portals to other worlds.

Whether it is Lewis Carroll’s Alice In Wonderland, J.M. Barrie’s Peter Pan, Frank L. Baum’s The Wizard Of Oz, Alan Garner’s Elidor, H.P. Lovecraft’s Dreamlands, or J.K. Rowling’s Harry Potter series, all the heroes and heroines of the tales are drawn into exotic lands through some magical entrance between two realities. Arguably, the most popular stories to utilize this theme are C.S. Lewis’s classic Chronicles of Narnia; the most famous being the wardrobe in The Lion, The Witch & The Wardrobe.

This literary tradition has a deep root in human consciousness. Throughout the history of humanity, whether it be through religious, scientific or mystical means, the exploration of inner space, has allowed access to levels of reality and existence beyond the senses. All great art is a manifest of the hidden, whether it is an emotional response in abstraction, or a piece conjured up from within the imagination.

In Aldous Huxley’s The Doors Of Perception, he writes about the powerful experiences he had whilst using the hallucinogenic chemical, mescaline. Again, the metaphor of a door or entrance is used to express the boundary between the everyday world and that of the altered state.

It was Huxley’s conviction that certain substances could open the mind to a reality untainted by sensory prejudices. This belief was not his alone, and has been an integral part of shamanic beliefs the world over, for thousands and thousands of years. It is by no accident that Alice ingests strange chemicals on her journey through Wonderland.

The creation of sacred spaces within a religious context, whether as a church, temple or shrine, or an improvised circle for ritual, are all places where everyday consciousness is banished, and altered states invoked. When we enter a place of worship, the symbols that surround us, trigger a referential change within that allows for prayer, communion with God, or the manifestation of spirits and magic.

The ultimate portal, which is the driving force behind all others, is death – the passing from one state of existence into another. At the centre of all religions, concepts of death dominate; even for the Atheist, who believes that it leads to a bleak black slumber of non-existence.

Shakespeare writes rather solemnly of the crossing over in Hamlet:

‘But that the dread of something after death,
The undiscover’d country from whose bourn
No traveller returns, puzzles the will
And makes us rather bear those ills we have
Than fly to others that we know not of?’

In J.R.R. Tolkien’s The Lord Of The Rings, there is a beautifully reassuring passage describing the threshold of death:

‘The grey rain-curtain turned all to silver glass and was rolled back, and he beheld white shores and beyond them a far green country under a swift sunrise.’