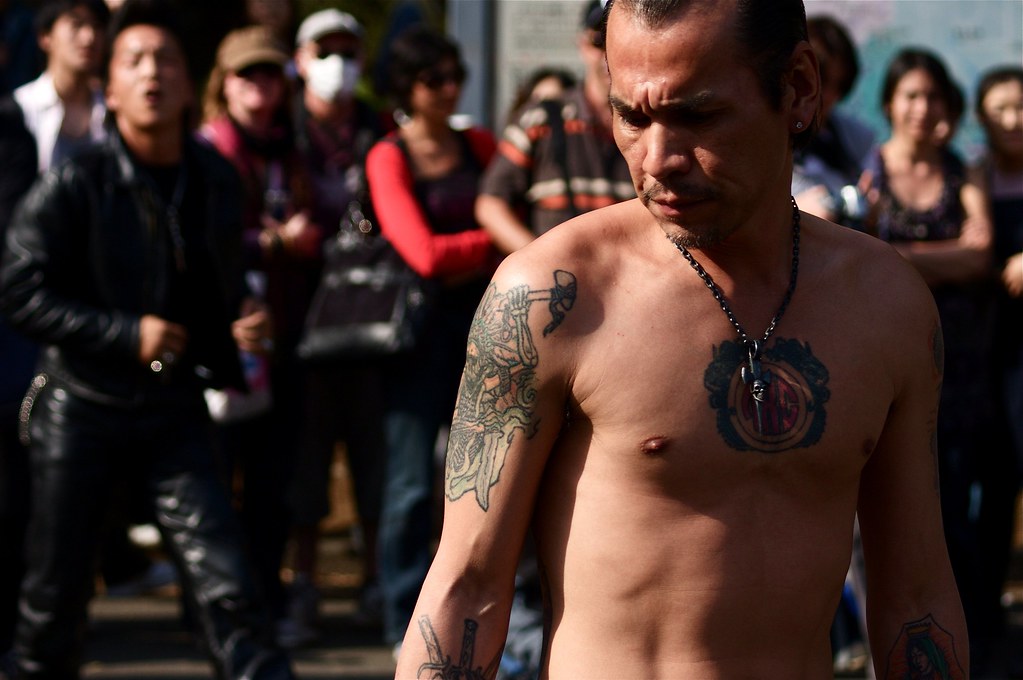 As I sat eating a meal at one of the small restaurants on Khaosan Road in Bangkok, a Japanese girl of about 25 years of age passed me by. Her hair was brushed back and tied in the style that is so prevalent of young travellers there. I could not help noticing behind her ear was a tattoo of a scorpion, and I wondered what the tale was behind it, and how she could possibly conceal it enough, so as not to damage any career path back in Japan, where tattoos are a taboo.

My imagination was sparked, conjuring up a tale about the day she decided to have it done and what followed since. It goes something like this:

‘A scorpion. Yeah, I like this one,’ Megumi pointed out to the Thai tattooist.

‘Behind the ear?’ he replied, ‘Are you sure about that?’

The body artist started up a CD of hardcore Techno, and a rush of fear and excitement pulsed through her. As the needle scraped her skin, her boyfriend continued to encourage her by telling her that what she was doing was cool, rebellious and so very Khaosan Roadesque, as he lay beside her, while having his own tattoo etched upon him. Forever, they would be part of the global backpacking cult of tattooed sun-worshippers.

‘Daijobu, Megumi-chan. Daijobu,’ he repeatedly reassured her in Japanese, wincing each time the needle touched his skin.  He felt reborn, alive and transformed.

Once back at Narita airport in Japan, the idealised rebellion that seemed so very right on holiday, quickly became a nightmare, as people stared and pointed at the two travellers.  On the train into Tokyo from the airport, they sat next to a mother with an infant on her lap.  The woman stared them up and down disapprovingly, shielding her child’s eyes, before quickly fleeing to another seat further down the carriage.

During the time since returning, Megumi has spent most of the past year obsessively trying to conceal the scorpion image from her parents and co-workers. Her long black hair luckily curls passed her ears enough to hide it. Unfortunately, she suffers now from chronic self-consciousness, and has developed a very odd habit of continually pulling her hair forward at the side.

At night time, she uses paper glue to stick hair over the offending spot, so that it does not accidentally reveal itself to her conservative mother, who awakens her each day. She tries desperately to always lay on her left side.

Her ex-boyfriend, now long gone, has been less fortunate, as it soon became apparent that a tattoo of a bright pink Gandhi on his forehead was going to swiftly bring an end to his career as an accountant. He is now unemployed and plays a didgeridoo in Ueno Park, dreaming of when he can earn enough money to return to Thailand for an image of Bob Marley on his neck.